Every Earth Day I force myself to look at it. It sits in its place on the wall, oblivious to the new reality. A mute reminder of that time, long ago now; an epoch some consider to be the pinnacle of our civilisation but which others recall with regret as a period of excess, of lust, of greed.

Climate change nearly destroyed us. Global temperatures rose to the point where crops failed, whole forests burned, lakes and rivers dried up. Populations — human and other fauna — roamed nomadically, ceaselessly seeking water and food until exhaustion got the better of them. A great many species were lost. We ourselves escaped extinction by the skin of our teeth.

As ever on this day, I turn away from the scene hanging on the wall to gaze out of the window at the twin of its skyline, far away. The myriad windows are, of course, no longer lit; and the massive structures are half-submerged in the sea.

One hopes we have learned the lesson, and that the future, whatever form it takes, will be one in which we continue to live in harmony with nature. Ah, if only we could have done so sooner. 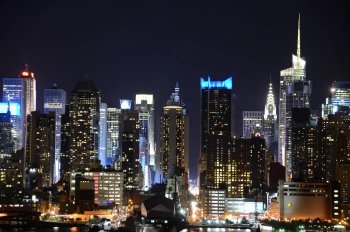 Word count: 199
Prompted by Flash Fiction for the Purposeful Practitioner
The theme for Earth Day 2020 is climate action