Being in the moment: in search of wu wei

For this last day of my ‘three day quote challenge’ I offer you not one but two quotations:

I think this is rather profound. I know that when I’m feeling down it’s when I’m dwelling on things that have happened in my life. And that’s foolish: nothing can change what’s been and gone… “what can’t be cured must be endured”, as the saying goes. As for anxiety: the same goes there too: when I’m anxious it’s because I’m thinking of something ahead (and all too often worrying about it). Ninety-nine times out of a hundred, my fears aren’t realised.

‘Being in the present’ is clearly the best way to be. Perhaps there’s something to this ‘mindfulness’ stuff. It seems to me that writing is ‘mindful’; even if what you’re writing about is events in the past, or ponderings about the future, in the act of putting words in a row you have to be in the moment to do so.

Though it’s only recently I’d encountered this quote, I wrote a poem a few years ago that resonates with this theme. It’s called ‘Thought for the day‘. You may notice something odd about the comments in that post, in that I didn’t appear to reply to any of them. In fact, I probably did reply to them all, but in those days I visited the commenter’s site and continued the conversation there. Which perhaps leaves the impression that I didn’t engage with my audience. (These days, I try to both reply here and visit the commenter’s site; but there are only so many hours in a day.) It’s not always what one does, it’s sometimes what one is seen to do that’s important. And then again, it’s sometimes not; all is perspective, everything’s relative :)

If you feel so inclined, please do follow that link above to my poem; I’d love to hear what you think.

I promised you two quotations: here’s the second one…

The journey of a thousand miles begins with a single step.
— Lao Tzu

This reminds me to try to tackle those tougher tasks in the knowledge that nothing can be completed without having been first begun; and, again, the point at which one begins any thing is in the now.

Both of these quotations are attributed to the ancient Chinese philosopher Lao Tzu (or ‘Laozi’), who encouraged a return to nature, rather than action. As technology may bring about a false sense of progress, Lao Tzu suggested seeking the calm state of wu wei, which may be translated as ‘effortless doing’. Paradoxically, ironically, though naturally enough, one cannot actively pursue wu wei; it manifests as a result of cultivation. I think this is what my friend Hariod Brawn has been trying to teach me all these years over at contentedness.net… 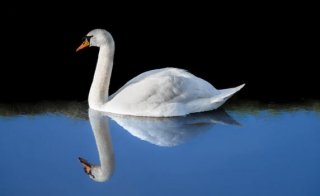 Although almost certainly what Lao Tzu didn’t have in mind, the concept of wu wei brings to my mind the picture of a swan, gliding along on the top of the water — while, below, the feet are paddling furiously!

Now, on to the nominations:

The rules of this challenge are: post a quote on three days, each time nominating three other blogs to pick up the challenge. Or — in the spirit of wu wei — not, as you see fit :)

A hat tip to rayoflight144 for nominating ‘Wibble’ for the ‘three day quote challenge’.
(This was my first day, and this was my second.) It’s been something a bit different from my normal forays into blogland!

29 Responses to Being in the moment: in search of wu wei