In the end, entropy always wins. 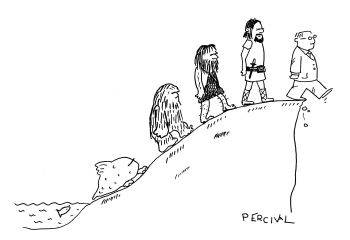 Sometimes, it can be hurried along.

On an insignificant speck of rock hurtling along in a vast expanse of nothingness, a thin film of gas nurtures a rare and wondrous thing that has, over aeons, struggled to improve and refine itself. Its latest offspring considers itself to be all-powerful; supreme master of the universe: yet, for all its vaunted skills, its visionary foresight is stunted such that it can barely see beyond the tip of its own nose.

At a time when the north polar ice cap — the air conditioner for the planet — is in full retreat, and the antipodes burn with an insatiable hunger, the descendants of those who once devised something they called ‘democracy’ are now so thoroughly subjugated by a crooked and broken global economic system — one that is both too big to fail and, at the same time, on the brink of freefall implosion — that they resort to felling the forest on the slopes of a mountain that was once believed to house a squabble of deities.

Just to keep warm (for a while).

On their way up, as they raped their way across the entire planet, these jabbering ape-descendants named themselves ‘homo sapiens sapiens’: the wise, thinking man.

On their way down — had they paused to think at all in their headlong descent — they might have reflected that they had succeeded in evolving into ‘homo fatuus brutus’: the foolish, stupid man.

Phlyarologist (part-time) and pendant. Campaigner for action against anthropogenic global warming (AGW) and injustice in all its forms. Humanist, atheist, notoftenpist. Wannabe poet, writer and astronaut.
View all posts by pendantry →
This entry was posted in ... wait, what?, Core thought, Culture, Just for laughs, News and politics, People, Phlyarology, Tributes and tagged entropy, homo fatuus brutus, stupid. Bookmark the permalink.