As well as being a phlyarologist, I’m a wannabe poet.

I think that poetry is like any artform: it has subjective value, modified by our perceptions. Since we’re all different, we’ll each come to our own decisions of the extent to which a ‘work of art’ has value. The idea that art has commercial value, with monetary valuations (applied by self-proclaimed art critics) makes no sense at all to me. That someone would pay millions for a work of art by this, or that, painter is, of course, down to individual choice — but the crucial point is that the monetary values aren’t chosen by the individuals themselves. No matter how much I might like a particular piece, my relative wealth (or lack of it) determines my ability to pay the price. And when it comes right down to it, the pieces of paper themselves (or, rather, the digital representations of these in banks’ computers) that constitute the buying price only have value as long as people believe they do. The global financial meltdown — I’m sorry, I mean the ‘credit crunch’ — of 2008 shows us what happens when this belief falters.

Which of the two orange circles is the larger?

Back in May 2007, I wrote a poem entitled ‘The Master and his Squire‘. Wendy asked me to elaborate, and I had begun an article attempting to do so — however, my draft, on which I spent a fair amount of time, was lost as a result of a combination of micro$loth’s decision to close Windows Live Spaces (forcing the move to WordPress) and my inability to acquire a round tuit at the time. (Which just goes to prove that just because digital technology allows you to store lots of information, this doesn’t mean that you will actually retain it for longer than you would if you’d written it on paper and put it in a box in the loft). I mention this as, while I’m not attempting to recreate my lost explanation of my poem here, my theme has a bearing on it. You could think of it as wine and cheese (though I’m not sure which is which). 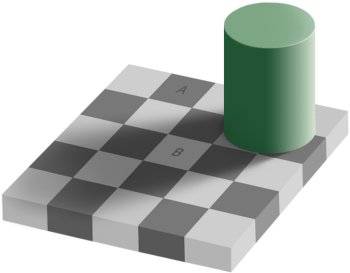 Are squares A and B the same colour?

Recently, a thread on Lack of Environment arose, of a type with which anyone who has been following the so-called ‘climate change debate’ in recent years would be very familiar. Polarised views clashing heads, and, as ever, no end in sight. In the course of that thread I was directed to some information that prompted my minor rant about denial yesterday. On reviewing that thread, I see I missed another important issue: the tentacles of the Kochtopus (many thanks to Lionel A for that).

Life is what you make of it (so They say — personally, I’d like to get my hands on Them, as I believe They have a lot to answer for). But it goes much deeper than that: Reality is what we believe it to be, and is modified by how we perceive it. 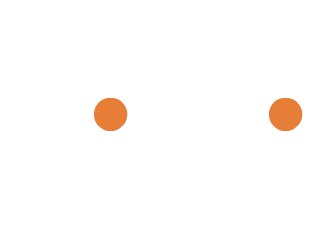 The two orange circles are, in fact, the same size.

‘Squares A and B’ are, in fact, not squares at all. They are, however, the same colour.

The truths to which we cling depend greatly upon our own point of view; and if we are to change the world, we must begin by changing the way we look at it.

Phlyarologist (part-time) and pendant. Campaigner for action against anthropogenic global warming (AGW) and injustice in all its forms. Humanist, atheist, notoftenpist. Wannabe poet, writer and astronaut.
View all posts by pendantry →
This entry was posted in ... wait, what? and tagged boundaries, cognition, habituation, illusion, reality, Star Wars, Steve Martin. Bookmark the permalink.

34 Responses to Illusion and reality