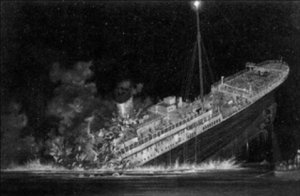 The screaming was over.

The shellshocked survivors huddled together on the few – far too few – lifeboats that pulled slowly away from the stricken ship. Some were clad in coats, donned in haste over nightwear; others shivered in gowns that would be brightly-coloured in better light. A smattering, only, of the hundreds crammed aboard the boats wore lifejackets.

Here and there, a uniform announced the presence of a member of the crew. ‘Women and children first,’ they’d said, and so the boats held very few men.

They stood in their scattering of tiny craft, initial shock giving way to merciless cold, and they watched in helpless disbelief as their unsinkable vessel broke in two and slid below the waves. In its wake, the surface of the deep was littered with hundreds of wrecked lives.

For the moment, anyway.

A short while later, in orbit high above the planet’s surface, the captain of the trawler Thisbig gazed wistfully down at the blue-green ocean far below. It had been a truly wondrous day. The catch was exceptional; his hold was crammed with prime fresh-frozen carcasses, mostly bulls, ready for market. Joy mingled with regret: a bigger cargo hold would have meant fewer left behind, to rot. Maybe next trip, he mused, I’ll be able to afford a bigger one.

He swivelled one gleaming eyestalk towards his second-in-command. ‘Set course for home, Number One.’

The red tendrils cresting the captain’s feathery eyestalks twitched momentarily, a nervous mannerism that his subordinate recognised from long acquaintance; it told him that his captain was undergoing some internal struggle. The tendrils came to a fluttering rest as the captain said, ‘And break open a second case of grog for the crew. They’ve earned it.’

A trio of wide, rubbery lips rearranged themselves into a huge grin. ‘Aye, aye, Cap’n!’

‘Before we get under way… bearing in mind the hunting ban in this sector, we wouldn’t want any inquisitive border customs officials wondering why the ship still resembles an iceberg, would we?’

Phlyarologist (part-time) and pendant. Campaigner for action against anthropogenic global warming (AGW) and injustice in all its forms. Humanist, atheist, notoftenpist. Wannabe poet, writer and astronaut.
View all posts by pendantry →
This entry was posted in Fantasy. Bookmark the permalink.